Statista research estimates that YouTube’s active users are around 2.3 Billion and of course, the numbers will be consistently clicking upwards daily, as more people in poorer communities around the world get connected.  YouTube come second only to Facebook in user numbers.  Then, of course, marketers are not only looking at the huge scale of potential customers out there, video advertisers are some of the highest converters, because the medium is immediate, captivating and hugely creative in potential. In other words, successful YouTube ads tend to be high quality, telling relatable stories.

We love stories, so it’s no surprise that YouTube viewers tune into this leading video channel for over 29 minutes per visit on average, according to Statista; many of these viewers will tune in more than once a day.  If you are ready to get creative with videos, your investment will pay for itself over and over with this relaxed, receptive audience.  YouTube is the second largest global search engine, given how irresistible video is to all of us.

Another powerful reason to consider advertising on YouTube, is that although YouTube is second only to Facebook for new visitors being reached, its linked sister, Google is, unsurprisingly the most visited search engine in the world.  Advertisers would do well to remember, however that as Google and YouTube are both part of the powerful Alphabet dynasty, ads on YouTube will benefit from linkage to Google.

YouTube Ads Are Crowd Pleasers for Audiences and Advertisers

Channel Switchers. ‘Think With Google’ offers some insights into their audiences from more than just data harvesting, they also invest time in researching their audiences too.  This helps them stay ahead of audience tastes and demands.  Their research has found that 4 out of 5 You Tube viewers  typically switch between searches online and video, when checking out products they want to buy.

Tire-Kickers-come-Browsers. Given that shoppers like to see how things look and work, video, of course, gets us closer to that real life experience touch and see experience in traditional shopping on the high street or in the mall.  Video research takes the hassle out of going out and shopping around before making a purchase decision.

The Silver Dollar. The trend for YouTube products and service researching is consistently growing. As well as younger generations growing up with online shopping and influencers, Covid has also boosted older audiences’ confidence in online shopping.  90% of Google’s global research participants have confirmed their experiences of discovering new brands or products via YouTube. If you thought this channel was purely about entertainment of education, think again; your buyers are keeping their eyes open for great offers.

Movers and Shakers. People are buying more as they move around their world, shopping between other activities. The ROI for YouTube ads via mobile versus television advertising is also increasing.  YouTube video adverts are 84% more likely to garner attention than traditional television advertising.    Researching products and services while on the move, or during down-time is convenient.   Shopping during the commute eliminates lost time and relieves the boredom of travel.  Snatched moments viewing videos have become part of our daily routine, particularly, researching, ready to buy there and then, or when users get home.  Shopping habits have clearly moved on, alongside our mini movie moments in the day. 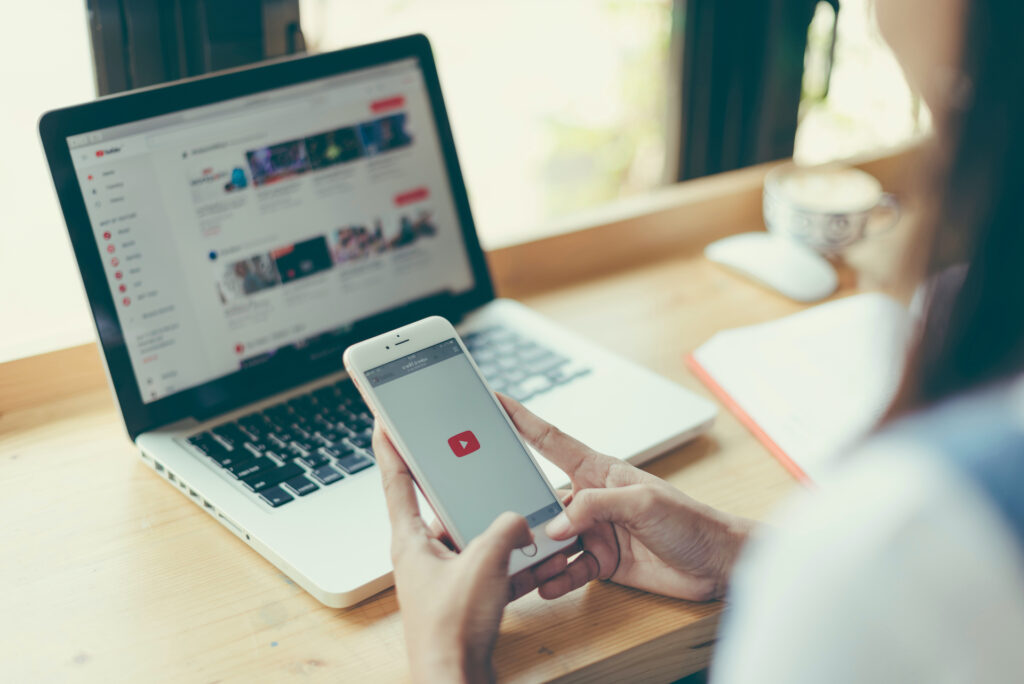 Hick or Slick Clicks. Sure, video ad production can get costly, but if you think that those multi-millionaire video influencers always made slick videos, then you haven’t spent enough time looking back at their early days.  Simplicity of production can be as enticing as sophisticated style and content.  Wherever your business is at, YouTube make advertising with them easy and attractive – not just through their huge audiences and leverage with Google.

What’s Up With That? You can start to make money with video pretty quickly and see higher conversion rates than other forms of advertising.  Remember, it isn’t just YouTube that people watch videos hosted there from either.  We are addicted to our mobiles and Whatsapp – owned by the Facebook family – also allow for videos to be viewed on their platform, because Facebook cannot ignore how much we love to share content via a channel respected for relative privacy, with its encryption.  So, think about that 2021 Statista figure we mentioned earlier of there being over 2.3 billion YouTube users (i.e. people logging in at least once per month), then think bigger, because those YouTube viewers are not included in that phenomenal statistic and even one year on will have seen exponential growth.  Sorry reader, we cannot be precise about the real figure, but we know that it’s one you cannot afford to ignore!

WeAllTube. Here’s another – probably out of date by now, but still significant – eye-opening figure to conjure with… In 2019, DataPortal claimed that 79% of internet users said that they had a YouTube account.  This fits the mission YouTube was set up for, i.e. to make video access fast and easy for users; their formula has worked, particularly with younger audiences. 500 hours of video are uploaded on YouTube every minute and young people increasingly see this channel as their route out of the rat race and according to Tech Jury, 75% of millennials prefer watching video to TV.

With the integration of ad’s into videos viewers like to watch, advertisers are warming viewers up consistently, fostering familiarity, building brand and enticing buyers in and making sharing our favourite finds simple. With the growth of influencers, YouTube video ads influence imperceptibly, merging comfortably into content actually chosen by the viewer.

The Billion Hour Day.  YouTube’s data harvest has filled our 24 hour day with billions of viewing hours.  Think With Google tells us that we viewers spend a mind-boggling one BILLION hours per day watching YouTube videos, each one of those views generating millions more through sharing.  It’s not only the second biggest search engine, it’s the second biggest social media platform, after Facebook, where you can also share videos… In fact this channel’s owners also boast that it has more viewers than any single T.V. channel…

The Global View.  Viewers watch YouTube in over 100 countries, where content is geared to local audiences and this is helped with text translation options for over 80 languages.  Of course, there are many more languages spoken around the world, but you can be sure that Google is working on that, with their speech search options.   So, advertisers can generate generic content, or tweak for geographically targeted audiences.  The growth of localisation services is testament to the growing reach of businesses operating online and not just for the more common languages like English, Urdu or Mandarin; check out their growing language range here.

In fact, a couple of years ago, it was reported by Pew Research Center that over 67% of translations were not into English… English content made up around 28% of videos, although they did tend to get around four times more views than those in other languages.

A Window in Time. Figures for the average viewing time of each video varies from anything around 5 minutes to 12 minutes, or even longer.  It really depends upon the demographics of the audience and the type of content being viewed, but we tend to like short and sweet, because we watch so much on the move, or snatching moments to ourselves during our busy day.  One particularly interesting insight by Search Engine Land was that searches using the ‘how to’ keywords are a growing source of interest to us, growing 70% year on year; we love to solve our problems by checking out someone else’s solutions.

Are you getting the picture yet that the YouTube video numbers themselves are like the moving pictures you see on videos hosted there?  The statistics for 2022 are still hard to pin down, as it’s early days , but rest assured the trend is always up on this popular channel.  We will be checking in through the year, as Google and others continue to keep us curious about YouTube video powers to convey messages and convince consumers around their growing video ad world. We’ll share, of course… 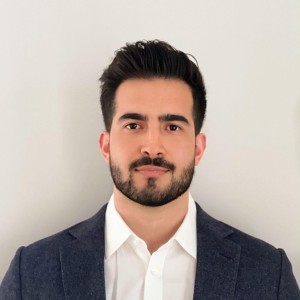 Sam Nouri
Hi! I'm Sam Nouri, the founder of AdsRunner. I've been working as a full-funnel digital marketer for nearly a decade, and have managed millions in ad spend for my clients. My aim is to help businesses scale and hit their growth milestones one at a time using innovative advertising methods and proven digital marketing strategies across all digital channels.

Sam Nouri
Hi! I'm Sam Nouri, the founder of AdsRunner. I've been working as a full-funnel digital marketer for nearly a decade, and have managed millions in ad spend for my clients. My aim is to help businesses scale and hit their growth milestones one at a time using innovative advertising methods and proven digital marketing strategies across all digital channels.
We use cookies on our website to give you the most relevant experience by remembering your preferences and repeat visits. By clicking “Accept All”, you consent to the use of ALL the cookies. However, you may visit "Cookie Settings" to provide a controlled consent.
Cookie SettingsAccept All
Manage consent

This website uses cookies to improve your experience while you navigate through the website. Out of these, the cookies that are categorized as necessary are stored on your browser as they are essential for the working of basic functionalities of the website. We also use third-party cookies that help us analyze and understand how you use this website. These cookies will be stored in your browser only with your consent. You also have the option to opt-out of these cookies. But opting out of some of these cookies may affect your browsing experience.
Necessary Always Enabled
Necessary cookies are absolutely essential for the website to function properly. These cookies ensure basic functionalities and security features of the website, anonymously.
Functional
Functional cookies help to perform certain functionalities like sharing the content of the website on social media platforms, collect feedbacks, and other third-party features.
Performance
Performance cookies are used to understand and analyze the key performance indexes of the website which helps in delivering a better user experience for the visitors.
Analytics
Analytical cookies are used to understand how visitors interact with the website. These cookies help provide information on metrics the number of visitors, bounce rate, traffic source, etc.
Advertisement
Advertisement cookies are used to provide visitors with relevant ads and marketing campaigns. These cookies track visitors across websites and collect information to provide customized ads.
Others
Other uncategorized cookies are those that are being analyzed and have not been classified into a category as yet.
SAVE & ACCEPT
Powered by